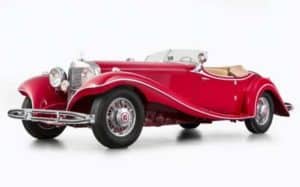 ’30s Benz Roadster with a History Set to Sell

Not only is this gorgeous 500k Special Roader by Mercedes-Benz only one of 29 existing models, it has also gained historic relevance. The Benz is said to have been owned by German industrialist Hans Prym who had lost the car to allied soldiers who had occupied his estate. In 2011 the Roadster was seized by the government and returned to the descendants of Hans Prym who have now set it for auction.

For your classic Mercedes needs, click here and find any parts you need for a tune up to keep the lifespan of your classic car maximized.

A rare Mercedes believed to have been stolen by Allied troops at the end of World War Two is up for auction with a £6 million price tag.

The 1935 Mercedes-Benz 500K Special Roadster was hidden on the estate of German industrialist Hans Prym, who was imprisoned in 1945, during the war.

But invading American troops stole the car while they lodged at Prym’s estate, according to Bonhams, which is handling the sale.

“It’s no surprise that the 500K appealed to Hans Prym, who was a highly successful industrialist,” said Philip Kantor, Bonhams European head of motoring. “The vehicle was vast, stately, and incredibly powerful, only to be possessed by the elite.” Continue Reading