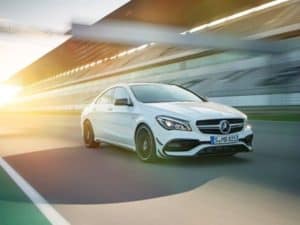 The 375-horsepower 2017 Mercedes Benz CLA is a beautiful machine and it boasts some impressive aesthetic changes from previous years’ models. The most drastic changes made to the 2017 CLA include an AMG aerodynamic package, advanced entertainment controls, LED headlights, smartphone integration and more.

Really, the only thing someone might want to change on the Mercedes Benz CLA is to swap out the rims for something more personal.

Mercedes-Benz has bestowed the 2017 models of CLA a minor mid-life makeover, packing in a 375-horsepower engine, high-performance headlights, smartphone integration and more.

Way back 2013, Mercedes-Benz initially rolled out its CLA compact sedan in the United States.

While the four-door CLA is the German automaker’s first compact car in the United States market, it was well-received by consumers. In fact, the automaker managed to sell nearly 30,000 of the sedans in 2015. Continue Reading