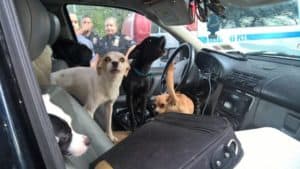 Puppies Saved from (What’s No Longer) a Luxury SUV

Police responded to a concerned citizen call which brought them to the Mercedes SUV that a 54 year old lady was using as her home in the Bronx along with a 4 year old German shepherd and 21 puppies. The puppies have been taken into shelters for recovery and have yet to be put up for open adoption.

While it is great news that the puppies are in good shape, it’s a shame the state the Mercedes SUV Interior was left in.

Authorities in New York City say they’ve rescued 22 dogs that were living with their owner in filthy conditions inside a Mercedes-Benz SUV.

New York Police Department officers alerted by a concerned citizen earlier this week found the 54-year-old woman and the dogs living inside the vehicle in the Bronx.

Authorities say a 4-year-old German shepherd named Bruno and 21 puppies were living in filth and needed medical attention when officers found them.

Two rescue groups are caring for the dogs. It’s unclear when they will be available for adoption.

The dogs’ owner was taken to a hospital for evaluation. Continue Reading