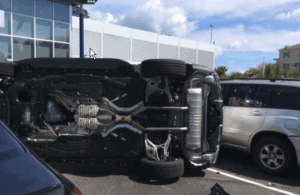 How Not to Take a Test Drive

As shocking as it sounds, a woman in Arlington, Virginia has caused a rather impressive, but fortunately 0-casualty, 5-car accident while when test driving a new Mercedes SUV in the Mercedes parking lot she suddenly accelerated into 4 other vehicles including her own personal car, and then over-corrected away from the crash flipping the dealership’s SUV onto its side.

The woman is currently nursing her wallet and pride after having the extensive damage to multiple vehicles Bodies, especially the test vehicles.

There’s a terrible stereotype that women aren’t exactly the best drivers, and one incident that took place last Friday certainly isn’t helping to dispel it.

While taking a Mercedes-Benz SUV out for a spin at a dealership in Arlington, Virginia, a woman suddenly accelerated the brand new vehicle, striking four other cars — one of which was her own.

In a panic, she then proceeded to turn the wheel at such a sharp angle that the car ended up flipping onto its side, according to WRC. Continue Reading