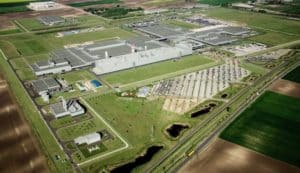 Mercedes has seemed to been relatively impervious to a hard market for auto makers, with low sells plaguing the market. The German fine auto producer has been running away as one of the sole car makers with positive growth rates, and now has invested a grand sum of money in a new Hungarian location for their new factory.

It’s yet to be clarified what exactly will be made at this new site other than that it will be producing a variety of automobiles. Speculation leads us to believe this may be a new site for Mercedes to expand its Hybrid production line as they intend to incorporate a few new models into this line by the end of next year. Another good possibility is that this factory will be a primary location for their fully electric cars coming in the near future as Mercedes does intend to have a wide range of models for their fully electric line, which means that the flexibility of this new factory’s technology could be fully utilized in production.

While it’ll be a while before you can reap any fancy new toys from this new factory, you may as well click here and get an up to date engine in your current Mercedes to keep you happy while you wait.
Daimler, the parent company of Mercedes-Benz, will invest one billion euros ($1.11 billion) to build a second manufacturing plant in Hungary. The factory, which will start producing vehicles by the end of the decade, will create 2,500 new jobs, the automaker says.

This is the second investment Daimler has announced this year for its Hungarian site in Kecskemet, a city approximately 56 miles from Budapest. In April, the company said it would invest around 580 million euros ($647.6 million) to expand and upgrade its existing plant, which produces compact cars.

The decision to build a second plant in Kecskemét suggests Daimler’s bet on Hungary, a country with lower wages than Germany and other European countries, is paying off. The company spent more than 800 million euros (at the time about $1.07 billion) to build the initial plant there—its first new factory in more than a decade. Continue Reading