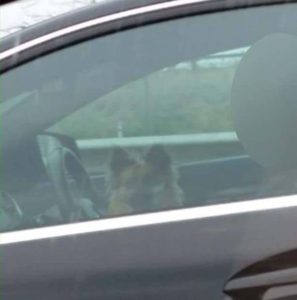 How would you react if you saw a dog driving on a busy road during rush hour? That’s exactly what Oliver Gee thought he saw during a commute home -a dog driving a Mercedes Benz C Class. Though it turned out that the dog was just sitting on the lap of its owner -and the person who was really driving the vehicle- and not actually controlling the Mercedes’ steering, Gee was able to snap a great photo of what he saw.

A private detective was stunned when he saw what appeared to be a dog driving a Mercedes car merrily down a motorway’s fast lane during rush hour.

Oliver Gee was heading home from work on the M6 in Cheshire when he saw the hound behind the wheel of the C class in the corner of his eye.

Quick as a flash the 33-year-old told his colleague Chris Lambert to get the camera ready as they passed the motoring mutt again.

But the dad-of-two realized [sic] it was in fact a human driver with a dog on his lap, seemingly allowing it to lean on the wheel with its feet. Continue Reading