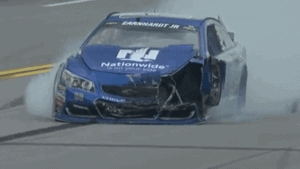 After a (second) crash during the famous NASCAR Talladega race during his 50th lap, Dale Earnhardt Jr.’s race came to an abrupt end. He was looking to achieve his seventh win, but instead will just need to put some work into his car, especially when it comes to fixing the car’s body.

Dale Earnhardt Jr.’s quest for a seventh win at Talladega ended on Lap 50 of Sunday’s Geico 500 after a three-car crash.

Much like the accident that cost him in the Daytona 500, Earnhardt’s car got loose and turned sideways into teammate Kasey Kahne’s car. Junior’s car jad heavy front-left end damage after hitting Matt DiBenedetto’s car. Damage also was caused to another Earnhardt teammates, Chase Elliott.

“I think trying to put the nose between the No. 19 (Carl Edwards) and the No. 14 (Tony Stewart) there is a lot of air coming off both those cars and just pinned the nose,” Earnhardt told Fox Sports after the crash. “We were real tight, the splitter was on the ground real bad the whole first run and we took some rounds out of the back and that really made the car too loose off of the corner. Same thing we did at Daytona.”