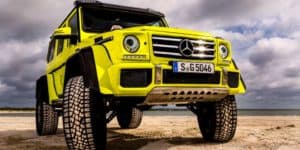 The Mercedes G-Squared, or G500 4×4^2 was a behemoth that landed in Carolina Beach to tower over other trucks at an annual off-road gathering and make first impressions. Well it certainly did with its 17” ground clearance and powerful engine and grip on even the trickiest of sands leaving it a show stealer at the show.

Unfortunately the G-Squared will not be showing up stateside until early 2017, but this demonstration was sure to generate interest. For those who’ve already invested in a modern g-wagon and aren’t ready to upgrade, click here for any G550 part needs.

The guy with the jacked-up Toyota Tundra pantomimes snapping a photo, so I pull alongside and peer down, down, at his truck—which is an unusual perspective when you’re next to a full-size pickup with 35-inch tires. I jump out and we both stand there gazing at the seven-foot-tall Bavarian Sasquatch drenched in highlighter-yellow paint and wearing German license plates.

“Man,” he says. “I never thought I’d live to see a jacked-up G-Wagen on Carolina Beach.” Me neither. We definitely won’t see two. Right now, this is the only Mercedes-Benz G500 4×42 on the continent.

You can buy a 4×42, or G-Squared, in Europe, Russia, the Middle East, and Japan. In early 2017, you’ll be able to buy one in the United States. Continue Reading