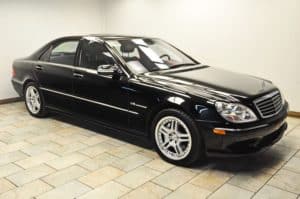 Including the likes of the 2003 Mercedes-Benz S55 AMG, 1992 BMW 850i, 1997 Aston Martin DB7 and more, the list collected at the linked-to page below shows off a number of cars that were originally sold for over $100,000 but are at incredibly low prices today. As far as that 2003 Benz is concerned, you could buy it and invest in only a handful of engine parts and it’d run like new.

If you’re like any other semi-narcissistic person out there, you probably enjoy owning something desirable and expensive, if only for the virtue of its exclusivity. And if you’re a cheap-ass like me, you’ll enjoy that feeling even more if you don’t go broke chasing it. Thankfully, here are five automotive examples of six figure masterpieces made affordable through the wonders of capitalism. Get your countin’ hand ready.

This Mercedes-Benz S55 AMG was the buff S-class range’s fast one. It had a supercharged 5.4-liter V8 that pumped out nearly 500 horsepower with every amenity you, or any human in the next several stages of evolution, would ever realistically need. Continue Reading