Hyundai On the Offensive with New Luxe Brand 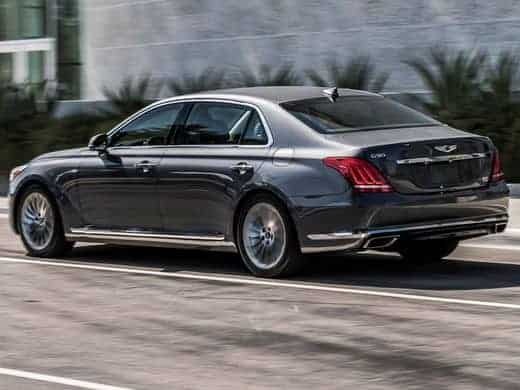 New Luxury Car Brand Genesis Has a Ton of Potential

(And Should Probably Scare the Heck Out of Other Luxury Manufacturers)

It looks like Hyundai really isn’t messing around when it comes to getting their new luxury brand Genesis off the ground. The new subsidiary car company already has somewhere around 350 dealerships across the country where the vehicles are available new and while that’s all well and good, there are some neat promises that will accompany the brand to up their luxury game.

For one, they intend on making most trips to the dealership a thing of the past when it comes to getting scheduled maintenance or repairs taken care of. Instead, they are planning to bring a loaner car right to the customer’s home and take the owned Genesis with them. Likewise, they’ll deliver the car back to the owner when the work has been completed. Where this differs from other brands is that it is a company-wide effort to offer this level of service as opposed to one that may or may not be offered from dealer to dealer.

What is crazy to think about is just how quick Hyundai began their move into luxury automaking. As pointed out by Chris Woodyard for USA Today, “Other luxury brands had years to plan the spinoff of their luxury brands. Hyundai did it in nine months.”
That also meant a heck of a lot more work than just designing and building the cars themselves, which Woodyard explained further, saying, “It’s fallen to a veteran auto executive Erwin Raphael to try to create a separate identity around the brand called Genesis. That has meant trying to get the word out and educate the dealer network about what it’s going to take to please luxury customers.”

Now, this move into the Luxury market by Hyundai should be more than just a little scary when it comes to other luxury brands like Mercedes-Benz, BMW, Acura, Lexus and others. In recent years, Hyundai has proven ridiculously capable when it comes to marketing and rebranding. Starting from scratch with a new brand should mean it is just that much easier for them to quickly build a reputation and a following.

Let’s look at what they did with the core Hyundai brand. Although they have been making cars since the late ‘60s, Hyundai didn’t really come into its own in the U.S. until the company started aggressively marketing here in 2000. Previous to that, they were barely regarded as decent when it came to bargain car companies were concerned, and honestly that view of them is generous considering they were not even close to being a recognizable household name at the time.

Since then, Hyundai has seen one of the most impressively meteoric growths ever witnessed in the automotive industry, and their growth is still going.

Less than a decade ago in 2008, the Hyundai Motor had barely broken into the top ten car manufacturers in the world. By 2012, they had made their way to the number five spot and currently they are the third largest car manufacturer on the planet, behind only Toyota and Volkswagen. They even own the single biggest car factory on Earth, which can be found in South Korea and builds more than one-and-a-half million cars every year in that one location alone.

As if all of that wasn’t scary enough to their competition, Genesis Motors has some real heavy hitters on their side when it comes to the luxury car manufacturing industry. Specifically, this is Genesis senior vice president Manfred Fitzgerald and brand designing lead Luc Donckerwolke. Fitzgerald used to be the director of brand and design for a little car company called Lamborghini. Donckerwolke was the design director for Bentley, Audi and Lamborghini.

Nevertheless, there is one thing that us Mercedes-Benz lovers can always be happy about no matter how the probable Genesis vs. Mercedes-Benz battle plays out: We have access to an incredible selection of beautiful and powerful classics that no new company could ever hope to compete with. Sure, that may not offer much peace of mind to Daimler, but it sure is for us. There really isn’t much more in the world that is nearly as cathartic as replacing a classic Mercedes-Benz transmission and taking a spin in a 35-year old car that rides like it’s brand new.