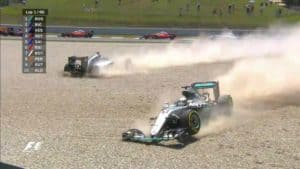 Lewis Hamilton and Nico Rosberg of the Mercedes AMG Petronas racing team ran into each other within a few moments after the 2016 F1 Spanish Grand Prix began. This was especially disheartening for the team considering Hamilton and Rosberg had won first and second spots in the starting grid. How’s that for bad luck?

Don’t let yourself lose control of your car… Check out what we have available for Mercedes-Benz steering and suspension.

The unfortunate event happened when Rosberg got past Hamilton on the first bend. Moments later, the reigning F1 champion tried overtaking his teammate from the inside. Rosberg tried blocking the move resulting to Hamilton hitting the grass. However, the Silver Arrow of the Briton spun and struck the car of the German along the way, which took them out of the race.

Niki Lauda, the team’s non-executive chairman, pinned the blame to Hamilton, according to a report. The F1 legend said the current world champion became too aggressive. Despite his initial take on the matter, he pointed out that he still needed to listen to the explanation of each driver.

Toto Wolff, the motorsport director of the group, agreed with Lauda’s observation. But he noted that there is also a fault on Rosberg’s part. Therefore, he will have to wait for the decision of the stewards. Continue Reading