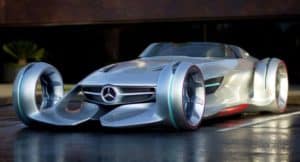 Hypercar Has a Chance at Production

The question has yet to be answered, but we’re waiting until October where Mercedes is expected to speak further on the details of the R50. Until then we can only look and appreciate the sleek futuristic looks and expected 0-60 in 2 seconds and top speeds of 220 MPH.

It is expected that if reception is strong enough that this car could go into production for the few with disposable income enough to buy themselves a hypercar.

For those of us who can’t afford the newest toys trickling out on the market, we’ll just be tuning our same old Mercedes engines and building our own tricked out ride.
The luxury auto world has been buzzing about the upcoming Mercedes-AMG hypercar being developed to thrash the one in the works from Aston Martin and Red Bull Racing.

According to Automobile magazine the project, known internally as R50, will be a cross between road-going supercar and a Le Mans endurance racing prototype. With a curb weight under 2,900 pounds it will be lighter – and therefore faster – than the McLaren P1, Ferrari LaFerrari and Porsche 918 Spyder.

Power is expected to derive from either a road-converted version of the 1.6-liter turbocharged V6 hybrid developed for Formula 1 (above), or AMG’s monster 2.0-liter turbo four, with output expected to top 1,000 hp either way. Continue Reading