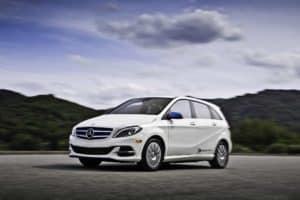 The Mercedes B-Class has gone under the radar of most car connoisseurs but it certainly deserves more attention than it has gotten. It entered the market undercutting the similar model from BMW, the i3, and now it cuts the cost by another $2,000 to become a real bargain as far as luxury electrical cars are concerned.

For further savings on Mercedes, click here and experience the savings on your own Mercedes motors.

You may not have heard of it, but Mercedes-Benz currently produces an electric vehicle, the B-Class Electric Drive. It exists as a competitor to BMW’s i3, and it’s shaped more like a crossover than a car. Now, it’s even cheaper, undercutting the competition by a few thousand bucks.

The B-Class Electric Drive just dropped to $39,900. Previously, it came in at $41,450, just under the BMW i3’s starting price of $42,400. (These figures don’t account for federal or local incentives.) It’s nowhere near as popular as the i3, but this price drop could attract attention from folks interested in something a bit fancier than a Nissan Leaf. Continue Reading