Mercedes-Benz Concept for 2030 Le Mans Prints Its Own Tires 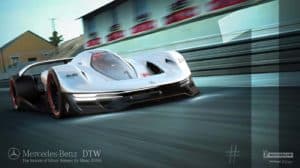 While the vehicle is simply just a design and we have yet to see such propositions in action, the Benz for 2030 Le Mans features some exotic features including the ability to custom print its tires to suit the surfaces it is driving on. The silver arrow is also capable of compressing air while driving, which it uses as its fuel source.

Well since your current Benz doesn’t run off of the air it drives through (yet), you should look into optimizing your fuel system. .

At first, it looks like it has absolutely zero in common with the Mercedes-Benz design language. That’s because the LMP cars usually have to play by the rules of aerodynamics, so they end up looking more or less the same, regardless of their manufacturer. However, since his proposal won’t actually have to take part in a race, he had a lot more freedom of expression, so he managed to squeeze in a few details seen on recent Mercedes-Benz concepts.

Take the “headlights,” for example. If they look familiar, it’s because this styling has been used on cars such as the F015 Luxury in Motion or, more recently, on the IAA Concept Car. Apart from that, though, take the three-pointed star away and this car could present itself with any other badge out there, no questions asked. Continue Reading