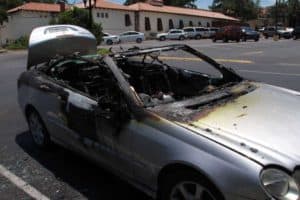 While the cause of the fire has yet to be determined, the only major property damage to happen at the country club seems to be this poor Mercedes Benz which has been totaled by the blaze. The smoke pillar from the CLK 350 could be seen from several blocks away. There has been no official police statement on if it was arson or not, but in my professional opinion, a Benz just doesn’t burst into flames like that.

For the driver of that car, I’d recommend clicking here and replacing that ashy old interior with something a little less fire damaged.

Firefighters extinguished the blaze after receiving a call at about 12:33 p.m. in the 4100 block of North New Braunfels Avenue. Smoke could be seen rising into the sky from several blocks away, according to a reader’s photo.

The vehicle, a CLK 350 convertible, was parked near the club’s pool but was not close enough to other vehicles for the fire to spread.

Police were not needed at the scene. Continue Reading