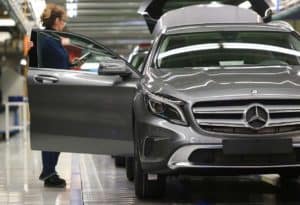 For some of us, the rivalry between Mercedes Benz and BMW owners is a lot of fun, especially when it means talking trash to a real life friend or two. For others, it can culminate in real hatred for Beamer drivers (Calm down. Seriously.). In any case, the news that Mercedes Benz grew at a rate twice as fast as BMW through the first quarter of this year makes for some excellent smack talk, which is only made sweeter by the fact that Mercedes Benz makes such fine autos with a bevy of great parts to work with.

Mercedes-Benz boosted sales twice as fast as BMW in the first quarter, moving closer to clinching the lead in the world’s luxury-car market for the first time in a decade.

The Daimler AG unit’s deliveries soared 13 percent to 483,487 vehicles in the three months through March, compared with a 6 percent increase to 478,743 cars for BMW AG’s namesake brand. Sales of compact cars such as the A-Class hatchback increased 26 percent to more than 150,000, Mercedes said. Volkswagen AG’s Audi ranked third at 455,750 vehicles sold, a gain of 4 percent from a year earlier. Continue Reading