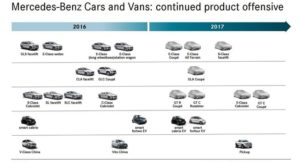 Where Mercedes-Benz is Heading

The roadmap we’ve gotten to see shows a busy game plan for Mercedes this year and the coming year and it seems their engineers have been busy at work designing up threats against the company’s biggest market competitors. In this and the coming year, Mercedes has 25 vehicles lines up for release. In the years full of new Mercedes Models, click here for good deals on body parts to help keep your Benz looking fresh in the rapidly evolving market.

Mercedes-Benz is on track to introduce no less than nine new or redesigned models. These include a facelifted S-Class, and a more rugged version of the brand new E-Class station wagon aimed squarely at Audi’s allroad. The E-Class lineup is also set to receive new coupe and convertible variants, while the company will introduce a pickup based on the Nissan Navara at the end of next year.

Interestingly, the original version of the presentation (pictured in our gallery) showed a model dubbed GLA Coupe. The slide was quickly amended, and the coupe’s spot has been filled by a simply a facelifted version of the GLA crossover. Mercedes hasn’t commented on the change. The GT R that debuted last month is also listed as one of the new models.

The slide also confirms that Mercedes-AMG is working on a topless version of the GT called GT C. It lists a coupe version of the GT C, which has fueled rumors that the 911-fighting model will receive a new engine next year. Although pure speculation, the GT C could be a more affordable model positioned at the bottom of the lineup. Continue Reading