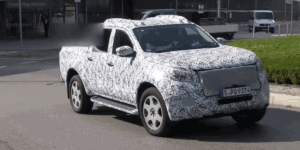 The first sighting of the first-ever Mercedes-Benz pickup truck has finally come with a YouTube video from walkoART who managed to take some sweet footage of the camo textured Mercedes Benz and upload it online for us to see.

If you wanted anything like a Mercedes pickup before, you’d have to do some serious suspension overhaul on their SUVs, what a wonderful time to be alive.

We’ve known about Mercedes-Benz’s first-ever pickup truck for over a year, but until now, we haven’t seen a prototype. That changes today though, because a heavily camouflaged pickup has been captured on public roads in Germany. The truck is rumored to debut by the end of this year, so it’s likely production-ready at this point.

The video of the truck, rumored to be called the GLT, comes to us from YouTuber walkoART – Videos, who features spy shots of various Mercedes-Benz prototypes on their channel.

Even under heavy covering, you can pretty clearly see a Metris-esque front facia. Otherwise, the truck looks not unlike the new Honda Ridgeline. Continue Reading