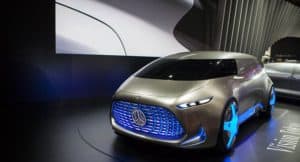 Surveys show that Mercedes drivers are among those who most desire for fully self-driving cars, while drivers of American trucks like Jeep and Dodge are among the lowest interest groups for the emerging technology. Perhaps it is ultra-luxury cars that will be the only vehicles to ever tout this feature, while trucks and SUVs will forever be left in the dark ages of requiring driver participation.

Not looking forward to autonomous cars for yourself? Check out our Mercedes Benz steering parts to keep your car controlling like new.

When you look at other cars on the road, do you wonder which of your fellow drivers are most wishing they were doing something else? In a new survey published this month, the answer is Mercedes-Benz and Infiniti drivers.

The survey, conducted by MaritzCX, asked 12,353 vehicle owners about their thoughts on autonomous cars. As reported in Bloomberg, about 27 percent of Mercedes-Benz and Infiniti owners say that are “very interested” in purchasing a fully autonomous car should they become available. That’s more than any the owners of other brand surveyed.