Mercedes and the Ever Nearing Future of Autonomous Cars 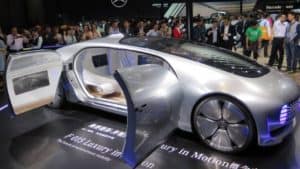 The autonomous car concept has been a hot topic this year, as more and more people realize that it is something that could hit the market next year if manufacturers believe autonomous models will sale enough.

An interview with Joe Mosier from Adsit gave insight on the market outlining the various interest groups regarding autonomous cars and his personal experience with Mercedes “puritans” who are likely to never give up their control of the road.

When self-driving cars made waves several years ago, they seemed like a very far off type of fantasy.  Well, companies like Tesla and Mercedes, BMW and others have made quantum jumps in technology and safety towards the end goal of an autonomous vehicle.

Of course, we have all heard about the unfortunate accident that happened in a Tesla, which was the first recorded death in a vehicle of that kind.

Tesla and Elon Musk have long been tickling our fancies about what it would mean to have that much more free time during your daily commute or road trip. Sadly a DVD player was found in the deceased’s vehicle and a truck driver says he saw Harry Potter playing on the screen right before the accident. Continue Reading