Mercedes’ GLB to be Different than First Assumed 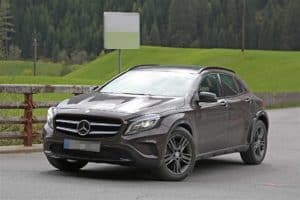 Since Mercedes-Benz first announced that they would be working on a GLB, most people felt as though the company was going to make it an off-road champion. However, they didn’t go that route (it’s not even certain if the GLB will have 4WD) but instead opted for a more modular vehicle, which should make swapping out Mercedes-Benz body parts or other pieces somewhat easier than their other models.

Mercedes-Benz has begun testing the mule of the upcoming GLB, the GLA’s brother. Instead of a baby G-Class, the GLB’s chassis mule is a slightly modified body of the ongoing GLA. Some rumors expected the GLB to be a fully-fledged off-roader, like the G-Class, but smaller.

Right off the bat, we notice an increased ground clearance. Suspension travel is also increased, and the wheel wells are also bigger than those of the GLA. Thanks to this uncamouflaged prototype, which is what the industry calls a “mule,” we can easily spot the differences when compared to a regular GLA.

The upcoming GLB is expected to come to market around two years from now, as an MY2019 vehicle. By then, Mercedes-Benz is set to launch its MFA2 platform, an evolution of the current MFA. Read More