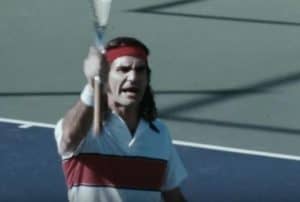 Benz Trying to Tie Tennis to Their Cars

Mercedes-Benz has released a 2 minute long video featuring Roger Federer who portrays himself as well as many great tennis players over the last 60 years alongside the ever changing Mercedes SL series.

A commercial that exemplifies honor for the great sportsmen of the past and their legacies, as well as hammering in that Mercedes greatness with the longest running history among all auto manufacturers.

For your Mercedes SL, be sure to maintain that gorgeous SL body so that legend will always look its best.

As the U.S. Open tennis tournament nears, Mercedes-Benz is teaming with one of the game’s all-time greats in a humorous ad campaign.

Thanks to a combination of computer-generated imaging and a camcorder, the campaign highlights tennis history by having Federer perform as stars such as Rod Laver, John McEnroe, Andre Agassi and Bjorn Borg.

At the same time, the videos also feature Mercedes SLs and how the roadster has evolved over the years.

Mercedes began releasing teasers last week on its YouTube channel. The full video (2 minutes, 9 seconds) was initially released by Federer on his Facebook page and is available on YouTube. Continue Reading