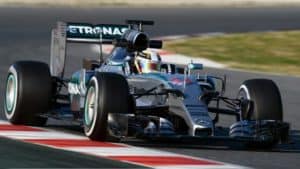 Mercedes F1 racing has been drawing many skeptical gazes as it transitions to use a hybrid engine. But does the auto giant have what it takes to prove the competition wrong?

As far as testing goes, it seems the Electrical aspect of the hybrid engines is capable of adding almost 200 bhp on top of the fossil fuel engine. Perhaps this F1 racer is a step ahead of its time, but it’s a step toward future efficiency and being ahead of the rest when it comes to fuel efficient engines.

But one area where they do not fall short is in the power stakes, with them pumping out much more horsepower than the V8 power units that they replaced.

They easily charged past the 900bhp figure, and there are now indications that the benchmark engine produced by Mercedes is giving out as much as 1000bhp during qualifying laps.

Of course, the figure will not be confirmed, with the technicians led by Andy Cowell at Mercedes AMG High Performance Powertrains obviously keeping details about its state-of-the-art engine a secret.

However, sources with good knowledge of the situation suggest that the latest specification Mercedes engine that was introduced at the Belgian Grand Prix is producing 980bhp. Continue Reading