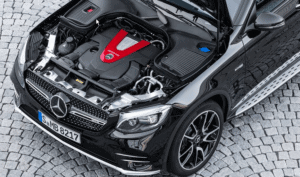 AMG Branding Coming to a GLC Near You

The GLC Class cars from Mercedes have always been a little half and half, with a comfortable classy sedan style fused with the utility of a SUV making them a nice balanced mix of Soccer Mom and Middle Class Bachelor. But Mercedes has sweetened the pot with the upcoming 2017 GLC by stamping on the AMG badge and throwing a powerful engine in making this versatile car able to pull 0-60 in 4.8 seconds.

Of course the mechanically savvy could always soup up their GLC with a new Mercedes Engine for a cheaper price than buying the newest model.

Addiction to half-coupe, half-SUV models is a very real thing. BMW first fell when it released the X6, a crossover very similar to the larger X5, but with a swoopier rear-end that, while attractive, cut into cargo space and headroom. Mercedes followed with the GLE and GLE Coupe. But BMW did it again with the smaller X3, creating the X4. And thus, Mercedes must do the same, releasing the GLC-Class Coupe.

The differences between the GLC-Class and the GLC-Class Coupe, the base model of which debuted at the New York International Auto Show, are largely cosmetic. Continue Reading