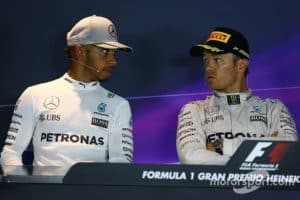 It seems Mercedes is dead set on not putting all their eggs in one basket as they’ve made clear their neutral stance between their two drivers Hamilton and Rosberg despite Hamilton being two points ahead.

The Mercedes Teams could focus all their power behind the winning racer but it seems they’re dead set on having a second good racer in case any troubles arise.

To feel like a Mercedes racer, check out these sweet new Mercedes engines.

Mercedes technical boss Paddy Lowe says that the team does not have any concerns about maintaining a level playing field for its drivers as the title battle between Lewis Hamilton and Nico Rosberg heads towards a climax.

Hamilton is just two points ahead of Rosberg after the German won the Italian Grand Prix, with seven races to go.

But Lowe insists that the team is now used to treating both men equally.

“We’re dealing with that all the time,” Lowe told Motorsport.com.

“One of our big, huge focuses in the team is to work as one, and keep everything absolutely as fair as possible with the drivers, and indeed for everybody to work together for the common interest, which is to get the quickest car on the day. Continue Reading