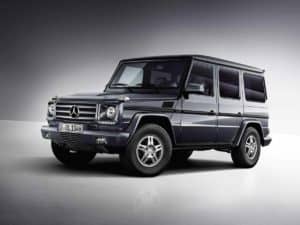 While far from a mainstay Mercedes-Benz line, the G-Wagon does eventually come around for an update every few years. The new photos snuck of the new generation of G-Wagons hardly looks like much of an update at a glance, but the acute eye could spot the wider stance of this beast, meaning it will have a roomier feeling cab and room for all sorts of amenities, all while shedding 900 lbs.

If you’re still driving the old G-Wagon that weighs as much as 2 normal cars, you might want to click here and look into replacing your stressed-out suspension.

The more things change, the more they stay the same, as they say. Changes to the Mercedes-Benz G-Class occur about as often as a labor strike in Major League Baseball. The current G-wagen is still popular, so why risk messing up a good thing? Change is scary, and for nearly 40 years, the G-Wagen has flown in the face of practicality, efficiency, and safety. We now have spy shots of the SUV’s replacement, and, at first glance, it doesn’t seem that much different.

Despite the camouflage, you can spot the differences on the new G-Class. The new model appears to be noticeably wider. The current model is from an age where cupholders didn’t exist and cars made do with fewer than 20 speakers. The extra space should provide plenty of room for both. Other than the width, the new styling looks more like evolution than sea change. Lines are still mostly straight and angles are still about 90 degrees. Continue Reading