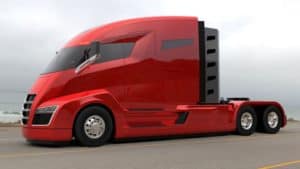 With a 1,200 mile range between gas stops, it looks like a new hybrid semi manufacturer, Nikola Motor Company, is carving a name for itself in the energy-efficient vehicles market with some very impressive engineering behind it.The company is named after the same inventor that the car manufacturer Tesla was named for (Nikola Tesla) and should have a lot of interesting engine and electrical parts.

Tesla is getting into trucking. At least his first name is.

The Nikola Motor Company, a Utah-based startup, has unveiled a compressed natural gas-electric hybrid semi aimed at disrupting the long-haul trucking industry the way the Tesla Model S did the car business.

The company is run by Trevor Milton, a former executive at dHybrid Systems, which developed a CNG system for tractor-trailers that’s now owned by Worthington Industries. Along with Faraday Future, Nikola is the latest automotive outfit named after an electrical pioneer to seemingly appear from the ether.