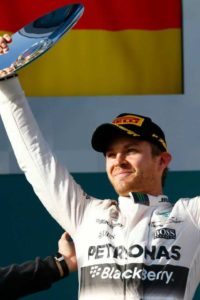 If the rumors are true, there’s a big chance that star Formula 1 racer Nico Rosberg will be leaving the Mercedes racing team in 2017 to get behind the wheel with Ferrari. The word seems pretty reliable, though, considering that the place promulgating this potentially very upsetting news is the newspaper Corriere della Sera out of Italy (where, if you didn’t know, F1 racing is insanely popular).

After the crash that happened in the first lap of the 2016 F1 Spanish Grand Prix, these rumors only feel that much more likely to prove to be a hard reality. Furthermore, it was Rosberg’s teammate Lewis Hamilton who claims full responsibility for the unbearably early crash.

And just as athletes in other sports are highly enigmatic whenever discussions of upcoming trades or moves are concerned, when Nico Rosberg was asked whether or not he was going to leave Mercedes, all he said was that he “feel[s] very good at Mercedes, but let’s see what the future holds.”

Things could quickly start to get really sticky for Rosberg should be really be thinking about departing, though. According to Daimer chairman Dieter Zetsche, Rosberg is “under contract for the forthcoming season.” Daimler, of course, being the company that now owns Mercedes-Benz. But, it might not really be all that cut and dry as the Mercedes team’s leader Toto Wolff hinted that there is some negotiating that needs to get done first.

If all this news of Rosberg leaving makes you want to give up following F1 racing, don’t leave too quickly as there is some hope on the horizon. Should Nico Rosberg really give up on Mercedes, another corresponding rumor indicates that he’d be replaced by Fernando Alonso. When speaking with Spain’s El Mundo, Wolff mentioned that Alonso had previously sought a contract with Mercedes at the beginning of the season but Wolff was under obligation at the time to not talk with other drivers due to Lewis Hamilton’s contract renewal. Wolff said that Alonso “is one of the best drivers in history and I like his character,” but still quickly noted that, “Our priority now is Nico.”

As is usually the case in situations like these, fans are in all sorts of an uproar with no real consensus about how they want this all to play out. In any case, seeing as these are all rumors at the moment, we will just have to wait it out to see what is really going on.

Looking to do some tuning and/or racing yourself? We have some of the best Mercedes engines available on the market.