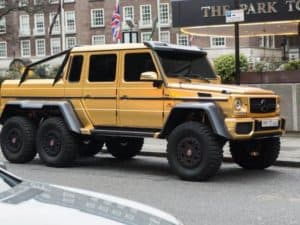 Although we can do a lot to make our Mercedes-Benz body parts look like new or made sportier, chances are pretty low that you’d be able to do what a Saudi billionaire prince has done. He has a fleet of golden supercars, including the six-tire Mercedes-Benz monstrosity seen in the picture here. To see more, check out the link below.

This tourist took luxury travel to a whole new level after bringing his fleet of flashy cars valued at $1.8 million to the streets of London.

The cars’ owner, a prince reportedly from Saudi Arabia, was snapped driving his uber plush fleet among the city’s busy streets this week.

The vehicles, which are wrapped in gold vinyl, have an estimated total value of $2.35 million, CNN reported. […]

The owner of the luxury fleet has been named as playboy prince Saudi billionaire Turki Bin Abdullah.

According to the UK Telegraph, the prince is currently in the country touring the wealthy parts of West London with a group of friends and instead of getting a private car or taxi, has brought his cars with him. Continue Reading