Mercedes-Benz has announced they are conducting a recall for 136 2016 AMG GT S sports coupes. This model from Mercedes-Benz is being recalled over problems with the powertrain, and the fix will see the AMG GT S get fitted with a carbon-fiber driveshaft.

As reported by the National Highway Traffic Safety Administration in the recall summary for the AMG GT S, “The adhesive bond between the carbon-fiber driveshaft and the rear flange may fail, [and] there may be a loss of torque to the rear wheels.” The summary continued by describing further issues that could arise, “The vehicle operator may be unable to move the vehicle, or may experience deceleration if the vehicle is in motion, increasing the risk of a vehicle crash.”

This recall is one of those events that prove yet again just how superior Mercedes-Benz is to other manufacturers. Where other car companies will not issue a recall until a substantial number of their vehicles had issues and experienced the breakdown of a specific part, the AMG GT S has only seen one incident happen to a customer last October. Even then, what the driver reported was that they heard some noises coming from underneath the car. From that, Mercedes-Benz put in the due diligence to determine the underlying cause of the noises and ended up discovering the driveshaft problem. Thankfully it is being taken care of before someone gets hurt because of a faulty part.

If you prefer to work on your car yourself and you want to replace the driveshaft on your vehicle instead of taking it in to a mechanic, visit our Mercedes-Benz drivetrain category page and take a look through our large selection. Likewise, the sale going on right now that we’re offering on most of our products will grant you a substantial discount on the price of the drivetrain part(s) you buy.

Though it only affects 28 Mercedes-Benz SLK roadsters in all of Australia, you may want to keep your ear to the ground if you have one in the US, too. While recalls like this are usually isolated to one country, Mercedes-Benz Korea has also implemented a recall for their SLK class vehicles. Australia’s recall is due to some steering issues and the one in South Korea is due to a malfunction that keeps the rear tires’ from aligning properly.

Should Mercedes-Benz recall SLKs on this side of the Pacific for any reason be it transmission, steering or anything else, you can rest assured that we’ll be there to let you know.

Mercedes-Benz has recalled its SLK roadster this week, due to a potential steering safety issue.

The carmaker has identified a weakness with the nuts fitted to the vehicle’s tie rods on the rear axle, which may be the incorrect size.

Should this be the case, the nuts may be allowed to loosen, which could alter the steering characteristics of the vehicle.

Unpredictable steering may cause a hazard to the vehicle occupants and other road users. Continue Reading 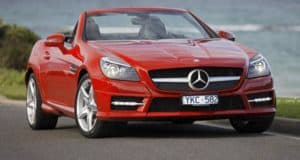 If you own a Mercedes-Benz SLK, you should act soon and get the battery backup fixed as soon as possible. You can get it done at any Mercedes Benz dealership with an attached mechanic and the fix will be free for you.

Those of you looking to repair or upgrade your electrical system yourself, you can check out the available Mercedes electronics by heading over to this page.

Mercedes-Benz has recalled its SLK sports model this week, due to a potential problem with the battery system.

The carmaker has identified a problem with power supply to the ignition switch, which could be interrupted.

Should the vehicle’s main battery fail, the backup battery will not supply energy to the ignition switch. This could render both the electric selector for the automatic transmission and the electronic park brake inoperable. Read More